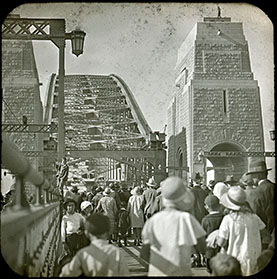 John Bradfield might be the person most closely associated by the public with the Sydney Harbour Bridge, but he was not the first to suggest a link must be built between the harbour CBD and its growing north shore.

The idea was raised as early as 1815 by Australia's first Government Architect, the former convict Francis Greenway, in a plan submitted to Governor Macquarie.

Royal Commissions subsequently championed the idea.  But, despite general acceptance of the need and Bradfield's 1915 proposal, it was 1922 before the government passed the Sydney Harbour Bridge Bill No 28, turning the first sod the following year.

Construction took more than eight years, involving the displacement of residents and demolition of buildings on the southern and northern shores to make way for the massive structure, and significant financial expense.

In the context of post-World War One economic upheaval when the decision to build was made and the  Great Depression following the financial crash of 1929's  Black Tuesday, the bridge took on new significance as a nation-building project and an icon of resilience, intellect and effort.

When it opened in 1932, the bridge had capacity for four lanes of traffic, as well as train lines on either side and room for pedestrians. Its visionary scale has meant that it remains fit for purpose in 2020 and despite numerous changes, including the operation of trams, additional traffic lanes, a dedicated cycleway and the recent removal of toll booths, its impact on shaping our metropolis cannot be understated. 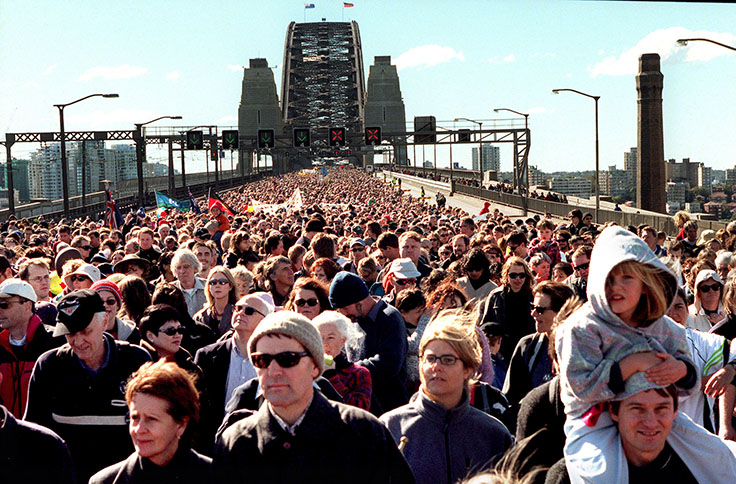 Newspapers proudly reported at the time that the Bridge's opening was celebrated with "pageantry that has never been surpassed in Australia."

It was the largest single-span bridge in the world for many decades, inspiring other iconic structures around the world, and did much to unite a nation while ostensibly uniting a city.

The bridge also performed another unifying role in bridging understanding between non-Indigenous and First Nations peoples when, 250,000 Australians walked across it in support of reconciliation. It remains the largest protest march in Australian history.