The 30-minute city is a long-term aspiration that will guide decision-making on locations for new transport, housing, jobs, tertiary education, hospitals and other amenities. It means that more housing, jobs, health and education facilities will be planned in metropolitan and strategic centres and more people will have public transport access to their closest metropolitan or strategic centre within 30 minutes. This will enable more efficient access to workplaces, services and community facilities.

As Sydney transitions to a metropolis of three cities, convenient and reliable access for customers by public transport to their nearest metropolitan or strategic centre is increasingly important for:

As the North District grows, planning and investment will integrate land use, transport and infrastructure, recognising and harnessing the city-shaping role of transport infrastructure. Initiatives to support integration in line with population and economic growth include:

A Metropolis of Three Cities and Future Transport 2056 outline the city-shaping public transport network and strategic road network initiatives which are integrated with the land use objectives for Greater Sydney.

The relevant transport initiatives for this District, and their role in supporting land use outcomes are outlined in the following Planning Priorities:

Access to strategic centres and interchanges will be supported by city-serving and centre-serving transport and an improved road network.

Northern Beaches B-Line is a city-shaping initiative - a multi faceted program to improve the capacity and reliability of the bus system relied on by the Northern Beaches community for access to the Sydney CBD and major local health, education, commercial and retail destinations at Mona Vale, Brookvale-Dee Why and Neutral Bay. Service on the B-line started late 2017 and it is providing extra services both during the day and into the evening.

Key elements of the city-serving and centre-serving transport network to be considered in the next 20 years include:

Where possible, the proactive and early reservation of corridors to protect longer term linear infrastructure opportunities should be undertaken to provide greater clarity and certainty for landowners, communities and businesses. In assessing potential infrastructure corridors, economic, social and environmental outcomes need to be considered. The early preservation of corridors also reduces the potential for conflict in the future.

The NSW Government is planning for the long-term transport needs of Greater Sydney by identifying and protecting corridors of land that can be used to deliver transport and infrastructure in the future when it is needed. Acting early, engaging community, and having an open and transparent process allows certainty for the community and all levels of government when making land use decisions or purchasing land.

Walking is a fundamental part of the transport system and most journeys start and end with walking. Pleasant and safe environments for walking and cycling contribute to great places where people and businesses choose to locate and invest. Direct, safe and accessible routes to local destinations and services should be prioritised within a 10-minute walk of centres. 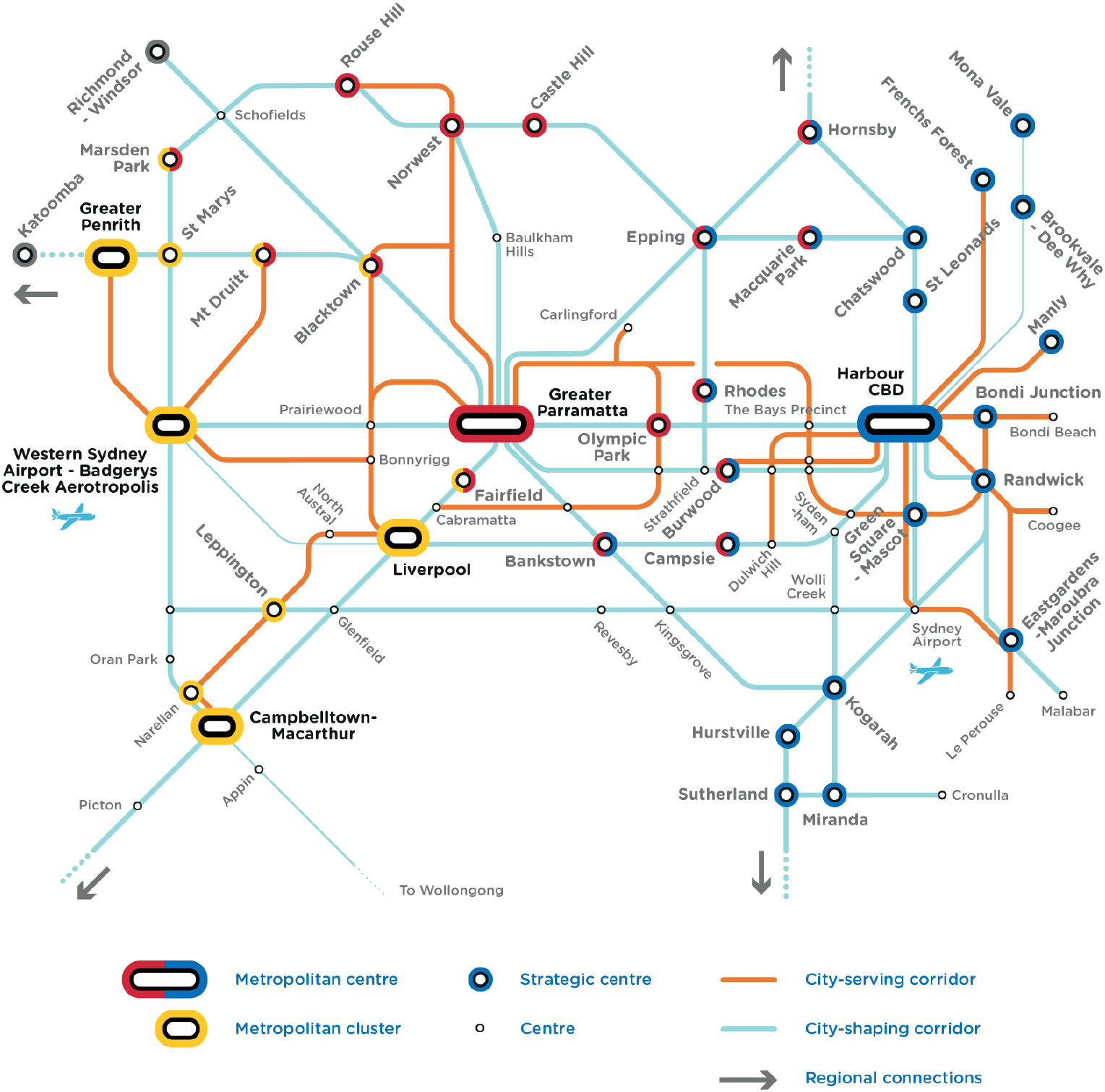 By 2036, the areas surrounding the Western Sydney Airport and Badgerys Creek Aerotropolis will be more urbanised than today. Residents within these areas will require reliable, fast and frequent public transport to access jobs and services.

The NSW Government is committed to meeting the transport needs of residents and will investigate how emerging technology and on-demand services will help meet the needs of Western Parkland City residents. 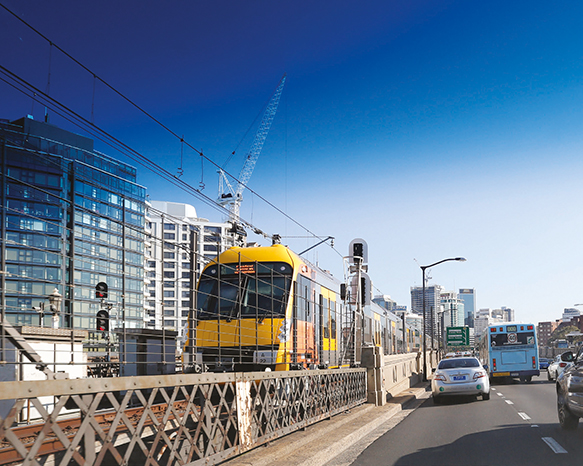 Mixed-use neighbourhoods with homes and schools close to centres and public transport improve the opportunity for people to walk and cycle to local shops and services. Enhancing the safety, convenience and accessibility of walking and cycling trips has many benefits including healthier people, more successful businesses and centres, and reduced traffic congestion.

Regional and local routes identified in local government bike plans, including the inner Sydney Regional Bike Network, will connect to the Principal Bicycle Network to facilitate a seamless and connected network within urban areas. Local streets will connect to these routes to provide door-to-door access for cycling.

A joint NSW Government and Northern Beaches Council initiative is planned to provide a 36-kilometre continuous coastal work linking Palm Beach to Manly, together with linking cycleways and shared paths.

Secure bicycle parking and end-of-trip facilities should be provided in centres to support cycling throughout the District.

Throughout Greater Sydney, there are many examples where councils and State agencies are embracing new technologies to promote adaptable infrastructure. For example, Blacktown City Council is investing in smart poles where electric vehicle drivers can charge their cars for free. In Sydney Olympic Park, Transport for NSW is trialling a driverless passenger bus to observe how automated vehicles can improve the mobility of customers and interact with other people. In planning for adaptable infrastructure, planning must consider opportunities for more flexible design of streets and public spaces; for example, through car parking strategies.

The NSW Government is introducing intelligent technology, known as a managed motorway system, to Sydney's motorways. Work has commenced on the M4 Smart Motorway project, which will use real-time information, communication and traffic management tools to maximise the performance of the motorway and provide a safer, smoother and more reliable journey.

Plan for urban development, new centres, better places and employment uses that are integrated with, and optimise opportunities of, the public values and use of Sydney Metro City & Southwest, as well as other city-shaping projects.