Environmental, social and economic values in rural areas are protected and enhanced

Home A Metropolis of Three Cities Sustainability A city in its landscape Environmental, social and economic values in rural areas are protected and enhanced

The Metropolitan Rural Area (refer to Figure 49) has a wide range of environmental, social and economic values. It covers almost one quarter of Greater Sydney and contains farms; rural towns and villages; rural residential developments; heritage, scenic and cultural landscapes; mineral resources; and locations for recreation and tourism. Its areas of high environmental value have been mapped by the Office of Environment and Heritage.

The Metropolitan Rural Area includes large areas where natural hazards such as flooding need to be managed as well as large areas that serve as locations for people to live in a rural setting amongst bushland, farms and other rural industries. A significant proportion of the Metropolitan Rural Area is under-utilised and has the potential to be used for more productive rural uses.

Farming in the Metropolitan Rural Area has been integral to the supply of Greater Sydney's fresh food for over two centuries. Agricultural production bolsters Greater Sydney's resilience, and agriculture is supported by a growing interest in local food production.

The Metropolitan Rural Area also contains mineral resources, particularly in the Western City District where commercial quantities of coal and coal seam gas are being extracted. Valuable supplies of sand, stone, clay and other materials are sourced from within Greater Sydney. Protection of these resources is important in supporting the construction industry.

Land use in the Metropolitan Rural Area will be influenced by:

Place-based approaches for landscape units within the Metropolitan Rural Area will help manage its environmental, social and economic values and maximise the productive use of the land.

Towns and villages of the Metropolitan Rural Area

The distinctive towns and villages of the Metropolitan Rural Area offer opportunities for people to live and work in attractive rural or bushland settings, close to a major city. They provide focal points for local communities and rural industries. They contain scenic and cultural landscapes which are important to the history and character of Greater Sydney, and are popular with tourists and visitors.

The Blue Mountains includes 27 towns and villages threaded along a sandstone plateau within a World Heritage-listed setting. Towns on the Hawkesbury River estuary and Port Hacking, such as Brooklyn, Wisemans Ferry and Bundeena, are recognised for their waterside and bushland character as well as their relative remoteness from the Urban Area. In the rural areas from the Hawkesbury River south to Wollondilly Shire, rural towns and villages such as Wilberforce, Mulgoa, The Oaks and Picton support an evolving tradition of farming and rural industry.

Maintaining and enhancing the distinctive character of each rural and bushland town and village is a high priority. Ongoing planning and management of rural towns and villages will need to respond to local demand for growth, the character of the town or village and the values of the surrounding landscape and rural activities.

A Metropolis of Three Cities recognises the need to consider several urban investigation areas proximate to the Western Sydney Airport for urban development, due to the infrastructure and investments associated with the airport.

The Western Sydney Airport and Badgerys Creek Aerotropolis in the Western Parkland City will change the relationship between urban and rural lands to the north and east of the airport. Three areas require investigation as future urban areas due to their proximity to existing urban areas and the potential and committed transport initiatives.

To the north of the Western Sydney Airport Growth Area, there are two areas that form part of the Greater Penrith to Eastern Creek Growth Area:

2. east of The Northern Road at Luddenham between the Western Sydney Airport Growth Area and the water pipeline.

The Defence Establishment Orchard Hills land has been included in the Growth Area to ensure coordination of existing and future land uses in the corridor.

To the east of the Western Sydney Airport Growth Area is the third area:

These urban investigation areas have been identified as part of a structured approach to managing the long-term growth of Greater Sydney in a deliberate and carefully planned way. Future Transport 2056 includes plans for major transport corridors in all three areas and the integration of land use with future transport infrastructure will be considered as part of the investigations into future urban development.

Investigations into the integration of future land use and transport at Horsley Park and Mount Vernon may indicate potential infrastructure links to a smaller area of rural land in Horsley Park, east of the M7 Motorway and surrounded by the Western Sydney Parklands. Such links would warrant investigation of how future land uses in this area could leverage off investments in infrastructure and remain compatible with its parkland setting. 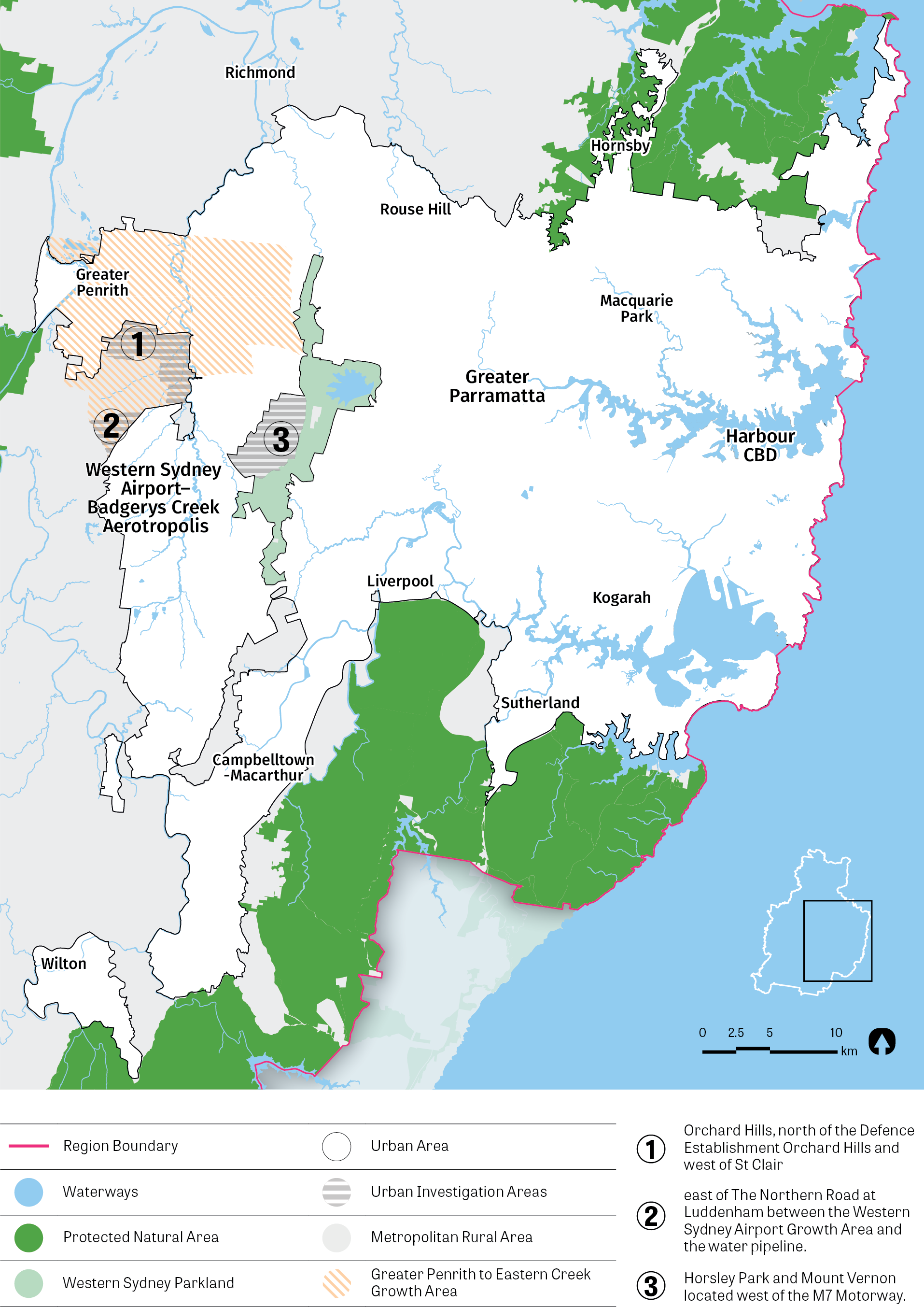 Managing the use of land so the initial extraction of construction materials is followed by rehabilitation and redevelopment of sites for other activities supports economic activity and maintains a more affordable and sustainable supply of construction materials. There are many locations across Greater Sydney where quarries have been successfully rehabilitated to create new residential areas, rural land, open space and community infrastructure, demonstrating the value of continued access to mineral resources with the rehabilitation and redevelopment of land.

Place-based planning can be used to identify, maintain and enhance the environmental, social and economic values of rural lands.

Parts of the urban-rural fringe are owned by Local Aboriginal Land Councils. Future planning of these areas may be more flexible in order to balance rural values with greater economic participation, and community and cultural uses by Aboriginal people.

Limit urban development to within the Urban Area, except for the investigation areas at Horsley Park, Orchard Hills, and east of The Northern Road, Luddenham.