The coast and waterways are protected and healthier

Greater Sydney has been a managed landscape since it was settled by Aboriginal people more than 30,000 years ago. The beauty of Greater Sydney's scenic landscapes is world renowned - natural waterways and ridgelines, the Greater Blue Mountains World Heritage Area and rural landscapes, the coastline, harbours and urban landscapes such as the World Heritage-listed Sydney Opera House.

The landscape of Greater Sydney is characterised by waterways - from the biodiversity in and around environmentally sensitive waterways to the economic productivity of its working harbours and the international attractions of its beaches. Its water systems provide drinking water, water for agriculture and water for the disposal of stormwater and wastewater.

Across Greater Sydney there is a strong cultural attachment to the coast and waterways, that provide important natural, economic, cultural and recreational assets. The city's beaches and Sydney Harbour are nationally and internationally recognised, attracting millions of visitors each year. Botany Bay, Pittwater and Port Hacking, with their scenic foreshores, biodiversity and important economic and recreational functions, complement Sydney Harbour and continue to shape the identity of Greater Sydney. Lake Parramatta, a popular swimming destination and the Parramatta River provide a setting for foreshore and water-based recreation that helps define the Central River City.

Frameworks to protect the coast and waterways

Councils will undertake management of coastal catchments in accordance with the new Coastal Management Act 2016 and the draft State Environmental Planning Policy (Coastal Management) 2016 as these policy settings take effect.

The Marine Estate Management Authority has prepared the draft Marine Estate Management Strategy 2018-28 which when finalised, will support a clean, healthy and productive marine environment. Improving water quality and reducing litter is one of the strategy's eight initiatives for improving the health of the coast and estuaries. The strategy notes that urban stormwater is one of the priority threats to the marine estate, and can greatly increase the amount of pollutants such as sediment, nutrients, chemicals, plastic and litter entering waterways.

In the Western Parkland City, the HawkesburyNepean River is a highly valued natural asset that links protected bushland, rural and urban areas and Penrith Lakes is a world-class sporting and recreational facility.

Improving the health of waterways is essential to the sustainability and liveability of Greater Sydney, including aquatic biodiversity and groundwater dependent ecosystems. Major coastal waterways will need to be managed to maintain and enhance views to and from the water and scenic foreshores, working harbour functions, water-based public transport and access to the water and foreshores for cultural events and recreation.

Waterways are part of the green infrastructure that support the vision of Greater Sydney as A Metropolis of Three Cities. While two-thirds of Greater Sydney's urban areas are within coastal and harbour catchments, the most significant change in Greater Sydney is set to occur on the Cumberland Plain centred around South Creek which flows north into the Hawkesbury-Nepean River (refer to Figure 47). This drier and flatter inland catchment is characterised by a network of creeks and intermittent waterways and extensive floodplains.

The South Creek corridor is central to the future sustainability and liveability of the Western Parkland City (refer to Objective 26).

The waterways of the Central River and Eastern Harbour cities largely flow east to the coast. In recent decades, there have been efforts to restore and improve the quality of waterways affected by past contamination. This is being delivered as part of establishing new parklands and urban renewal developments such as the reinstated public foreshores along the Parramatta River.

Currently, Sydney Regional Environmental Plan (Sydney Harbour Catchment) 2005 provides a framework to maintain, protect and enhance and the catchment, foreshores, waterways and islands of Sydney Harbour. There may be opportunities to take a more comprehensive view as to how major waterways and their foreshores across Greater Sydney are managed and protected.

The community values access to waterways for recreation and cultural events just as it values the protection of environmentally sensitive waterways. The NSW Water Quality Objectives identify the high-level goals for several catchments. Quality natural waterways and a temperate climate make water-based activities part of the culture and identity of Greater Sydney. Access to waterways should not compromise the integrity of environmentally sensitive aquatic and riparian habitats.

Water-based transport is also part of the economy and cultural identity of Greater Sydney. Future Transport 2056 and its supporting plans set out the role of ferries in Greater Sydney's transit network, as well as initiatives to support the growth of the cruise industry and freight shipped through Sydney Harbour and Port Botany.

Prospect Reservoir is the largest body of water within the landscape of the Central River City. The 5.2 square kilometre lake is surrounded by Prospect Nature Reserve which contains urban bushland, picnic grounds and bicycle tracks, and is part of the larger Western Sydney Parklands49. Prospect Reservoir remains an integral part of Greater Sydney's drinking water supply and is required in times of high demand for water.

The Greater Sydney Commission is working with the Western Sydney Parklands Trust, Sydney Water and WaterNSW to investigate further opportunities to transform Prospect Reservoir into a significant nature-based destination to meet the recreational needs of the community while protecting its important role in Greater Sydney's water supply.

Any additional recreational facilities will need to be carefully considered, so that they do not compromise the health of the drinking water catchment or biodiversity.

In time, Prospect Nature Reserve could become a great destination for the Central River City and the Western Parkland City. 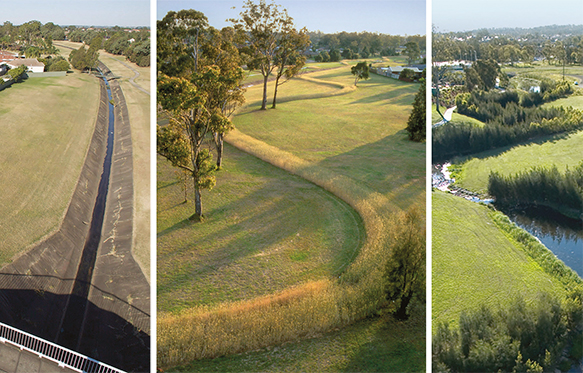 Greater Sydney's waterways are protected by applying the Water Management Act 2000 and by councils through their local environmental plans. Many councils have identified and mapped environmentally sensitive areas of waterways that are important to the local community and use additional local provisions, and natural waterways and environment zones, to protect these areas.

Opportunities to protect waterways and at the same time enhance liveability and productivity, are part of an integrated approach to managing green infrastructure. The NSW Department of Planning and Environment is preparing a bushland and waterways manual, as part of a green infrastructure policy framework, to help guide the management of waterways.

In many of the older more urbanised areas, waterways have been converted into underground pipes or concrete channels. Clear Paddock Creek in Fairfield is an example where reinstatement of a more natural system has improved water quality and provided significant amenity improvements to local open space, in particular by supporting trees and canopy cover that improve the local microclimate.

For local waterways, where governance and ownership of the waterway can be highly fragmented, a green infrastructure approach, which values waterways as infrastructure, can lead to more innovative management of waterways with outcomes that better reflect community expectations.

The 2017 Metropolitan Water Plan contains strategies to improve the contribution that water makes to the liveability and the resilience of urban communities. It sets out commitments to releasing environmental flows from Warragamba Dam. This will help reduce the impact of high nutrient levels and other pollutants on the Hawkesbury-Nepean River.

An integrated approach to the protection and management of waterways relies on comprehensive monitoring and reporting of water quality and waterway health. It also requires strategic alignment of science, urban design, land management and planning frameworks to be effective.

Outside drinking water catchments, waterway protections for aquatic ecosystems and cooler, greener environments are managed by councils, Sydney Water and State agencies. Management can be fragmented, as stakeholders have different roles across council boundaries. To improve the health of catchments and waterways, the cumulative impacts of strategic planning, development controls and management need to be considered.

The Office of Environment and Heritage and the Environment Protection Authority promote the use of a risk-based decision framework50 across catchments to help improve the health of catchments and waterways and to manage the cumulative impacts of development and land management practices. The framework:

Enhance sustainability and liveability by improving and managing access to waterways, foreshores and the coast for recreation, tourism, cultural events and water-based transport.

Improve the health of catchments and waterways through a risk-based approach to managing the cumulative impacts of development including coordinated monitoring of outcomes.

A secure and sustainable supply of water is essential for Greater Sydney to grow and prosper. Reliable and affordable water is vital for households, businesses and industries to thrive and remain economically competitive.

Water is a limited natural resource that needs to be managed for the benefit of the community. Population growth, drought, climate change and changing community expectations present challenges and can increase demand for water.

Greater Sydney's drinking water is supplied from catchments covering over 16,500 square kilometres51. The main sources are in the Blue Mountains and the Southern Highlands. Protections for drinking water catchments are in the State Environmental Planning Policy (Sydney Drinking Water Catchment) 2011.

The 2017 Metropolitan Water Plan outlines the measures that help provide Greater Sydney (and the Illawarra) with enough water to meet community needs into the future.

The NSW Government is implementing the 2017 Metropolitan Water Plan and will continue to review plans to secure a sustainable supply of water for Greater Sydney, as required.