The Eastern, GPOP and Western Economic Corridors are better connected and more competitive

Home A Metropolis of Three Cities Productivity A well-connected city The Eastern, GPOP and Western Economic Corridors are better connected and more competitive

Greater Sydney's Eastern Economic Corridor (refer to Figure 40) has high concentrations (agglomerations) of jobs with good road and public transport connectivity, which allow high levels of interaction between businesses and people. The economic benefits of the agglomeration of activities in this corridor are reflected in its contribution of two-thirds of the State's economic growth over the 2015-16 financial year.

The well-connected Eastern Economic Corridor from Macquarie Park to Sydney Airport is of national significance and currently contains approximately 775,000 jobs. The major assets of the corridor include:

In the Eastern Economic Corridor, economic activity is also being facilitated through the work of the NSW Department of Planning and Environment, UrbanGrowth NSW Development Corporation and Landcom in the following initiatives:

The economic activities form a corridor from Westmead to Sydney Olympic Park (refer to Figure 40).

GPOP is integral to the vision of A Metropolis of Three Cities and the Central River City. The transformation of GPOP will assist in rebalancing opportunities across the Greater Sydney Region.

GPOP is envisaged to become Central City's connected and unifying heart. Both the Parramatta Light Rail and the Sydney Metro West will be catalysts for realising this vision. New radial connections will also be essential.

Sydney Metro West has the potential to significantly enhance Greater Parramatta's inter-city link with the Harbour CBD through improved journey times and frequency of service.

Improved transport connections within GPOP and to the nearby strategic centres would deliver the economic benefits of agglomeration including enhanced opportunities for business-to-business interactions and access to larger skilled labour pools. Transport connections have the potential to create a cluster of economic activity with up to 370,000 jobs within a 10-15 minute public transport catchment.

Equally important is the creation of high quality, new places for people to enjoy a more urban lifestyle. Parramatta CBD is the first of these.

The Greater Sydney Commission is providing a new platform for collaboration across State and local governments, businesses and the community in delivering the GPOP vision. A place-based approach to planning for the future in the most central part of Greater Sydney is core to this new way of working. Key focus areas are to: 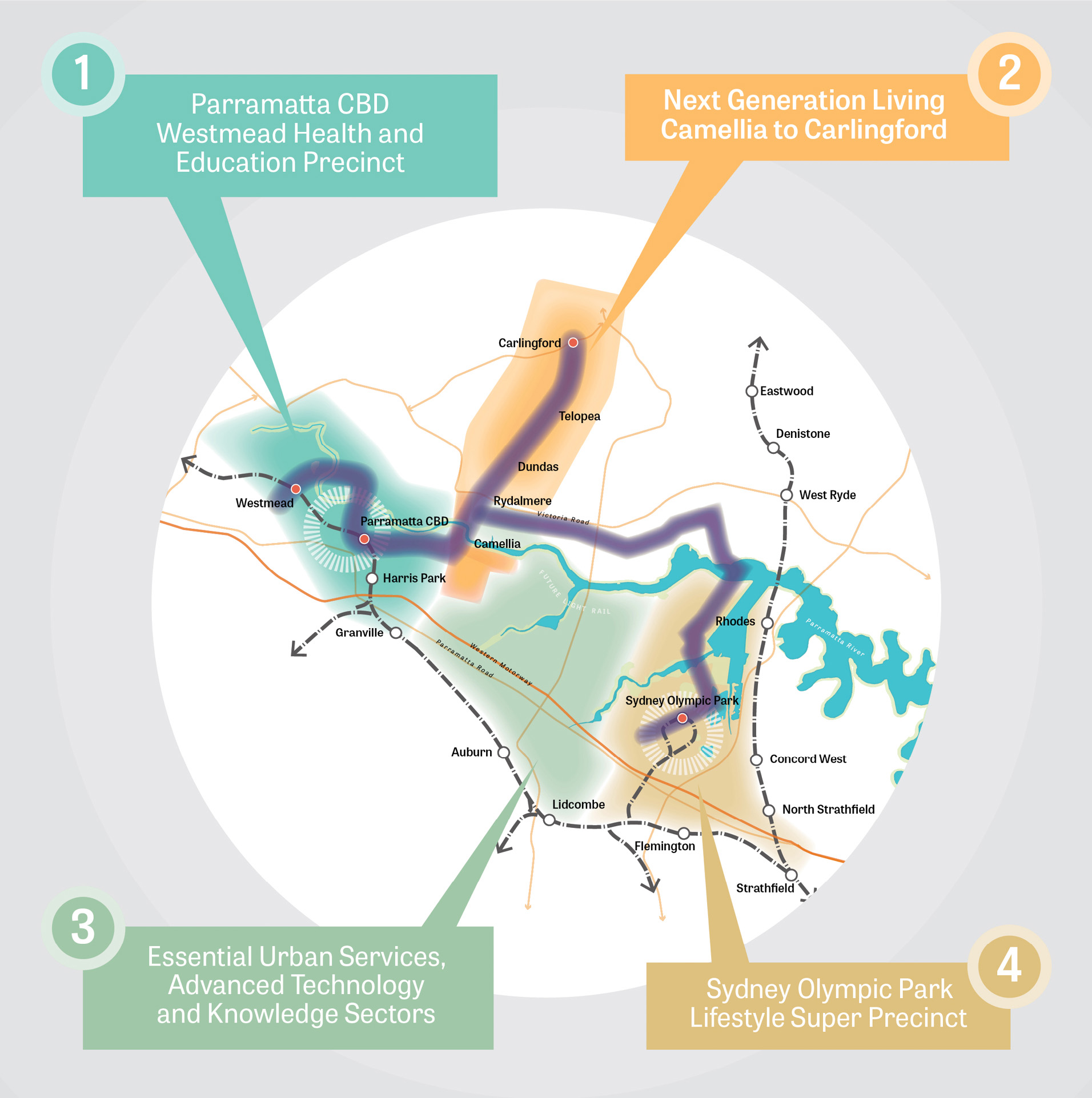 An interim planning framework to deliver this vision has been outlined by the NSW Department of Planning and Environment. This includes an Interim Land Use and Infrastructure Implementation Plan across a range of precincts, a program for the development of a Special Infrastructure Contribution and further precinct investigations.

The GPOP collaboration is looking to wider opportunities to improve liveability outcomes that maximise benefits in the surrounding areas such as more walking and cycling paths and greater collaborations with Land and Housing Corporation.

These new economic agglomerations, together with planning and delivering a transport network to support the significant projected population growth, create the opportunity for a potential northsouth train corridor which can act as a catalyst for a Western Economic Corridor (refer to Figure 40).

In developing a Western Economic Corridor consideration needs to be given to:

The delivery of a new Western Economic Corridor is integral to the approach of creating more jobs and a diversity of jobs in the Western Parkland City (refer to Objective 20) and the metropolis of three cities.

A range of strategies support the delivery of the economic corridors.

In addition to enhancing accessibility within the corridors, growing investment and businesses in centres and trade gateways is fundamental to their ongoing success. Objective 22 outlines how the Plan seeks to grow jobs in Greater Sydney's centres and Objective 16 provides similar guidance for trade gateways.

The Greater Sydney Commission to continue leading the collaboration of councils, State agencies, businesses and the community to deliver the GPOP vision. Being the connected and unifying heart of the Central City, GPOP is being championed as a place for new businesses, homes and services; for diverse employment; for walking and cycling; and to facilitate spaces for arts and culture.