In the long term, well over 1.5 million people will live and work in the new Western Parkland City. Mass transit connections to existing strategic centres, the Western Sydney Airport and Badgerys Creek Aerotropolis will act as economic catalysts, stimulating activity across the city with South Creek providing a green spine to improve amenity and environmental outcomes.

The emerging new city will be driven by economic opportunities created by the Western Sydney Airport and Badgerys Creek Aerotropolis and significant population growth, which will bring city-scale infrastructure and new advanced manufacturing, logistics and research industries providing hundreds of thousands of jobs over the long term.

Aerospace and defence industries are technologically advanced, dealing with state-of-the-art systems and operations. The air transport sector is anticipated to gain most benefit from the Western Sydney Airport, growing to $6.4 billion29. The existing strengths of the Western and Central cities in relation to aerospace and defence components include:

Western Sydney is home base for significant Australian Defence Force capabilities, including the RAAF Heavy Air Lift Group and Australian Army Special Forces. This concentrated presence means the region is home to a large number of defencecapable companies and organisations, including numerous prime contractors.

The Australian and NSW Governments have come together with local governments and agreed a set of commitments that will unlock opportunities in education, business and employment of the Western Parkland City and its people.

The Western Sydney City Deal includes six commitments: connectivity, jobs for the future, skills and education, liveability and environment, planning and housing and implementation and governance.

The Western Sydney City Deal is about:

Western Sydney Airport will trigger regional-scale growth in these industries, given the availability of land, skilled labour, research and development opportunities and key transport linkages. There is capacity to grow more high-value, tradeable jobs and further develop globally competitive capabilities in skills and technology.

The NSW Department of Industry is leading the development of a world-class aerospace and defence industries precinct adjacent to the Western Sydney Airport. It will entail the physical and virtual cluster of the aerospace, defence and related industry businesses, research and development facilities and training institutions. It will be an advanced technologies hub, with horizontal capabilities (information and communications technologies, data analytics, cyber security, advanced electronics, advanced manufacturing and systems integration) across both the aerospace and defence sectors with the potential to expand to other sectors.

A feasibility study has projected that the precinct could create approximately 5,000 jobs and over $15 billion of gross value added over the next 30 years.

In May 2017, a leading global security company committed to a $50 million investment in a new advanced defence electronics maintenance centre in the precinct. This is the first of a range of businesses expected to establish a presence in the precinct.

The commitment of $5.3 billion of funding by the Australian Government in the 2017-18 Budget to build the Western Sydney Airport by 2026 has positive implications for precinct. The development of the precinct will align with this schedule to leverage the once-in-a-generation opportunity of the new airport. It represents a critical economic growth opportunity for the Greater Sydney Region.

The RAAF Base Richmond Precinct will complement the airport and aerotropolis activities. Precinct activities include aerospace activities (defence and civilian); a Western Sydney University campus, TAFE NSW Richmond and a range of equine activities.

As low value-added manufacturers move offshore, the Australian manufacturing sector has been transforming with growth in the advanced highvalue sector. The expanding sector is characterised by significant investment in innovation, research and development as well as the use of technology and the production of goods that have a relatively high value. The research and development component includes opportunities to work closely with universities. The Western Parkland and Central River cities are manufacturing leaders in NSW, with well-developed specialisations in advanced manufacturing.

The existing freight and logistics activities of the Western Parkland City will be boosted by a number of transport initiatives which will significantly improve the accessibility of the Western City with other parts of Greater Sydney and regional NSW. These initiatives include the Western Sydney Freight Line, the Outer Sydney Orbital and a potential new intermodal terminal. Agribusiness opportunities will be supported by the allocation of land within the airport precinct for agricultural export logistics - improving links to new markets. The State's premier quarantine and biosecurity facility, Elizabeth Macarthur Agricultural Institute at Menangle, will play an important role and increase opportunities for agriculture research and education jobs.

The new Western Parkland City will be founded on the existing centres of Liverpool, Greater Penrith and Campbelltown-Macarthur and their commercial, health and education assets will support the growing communities (refer to Figure 34, Figure 35 and Figure  36). These centres form part of the metropolitan cluster serving the Western Parkland City (refer to Objective 22). Their importance in providing a focus for commercial activities and population services as the Western Parkland City develops over the next 20 years cannot be overstated. There is an opportunity to substantially enhance the city's economic growth through their development as a ring of university towns, building on the existing tertiary facilities in each. Over time, the Badgerys Creek Aerotropolis could become a fourth university town. The strategy to deliver the university towns will seek to:

There are already a number of investments underway to support the delivery of the university cities and their complementary health activities including:

Significant land release development is still to occur along the South Creek corridor. People will live in and around new centres along the length of South Creek and its tributaries, providing a high level of liveability in a quality urban environment adopting best practice from cities around the world. High quality living will attract and retain businesses, skilled workers, international and domestic clients, students and service providers.

The spatial pattern of this new city will be based on the integration of land use, transport and other infrastructure over the life of this Plan: 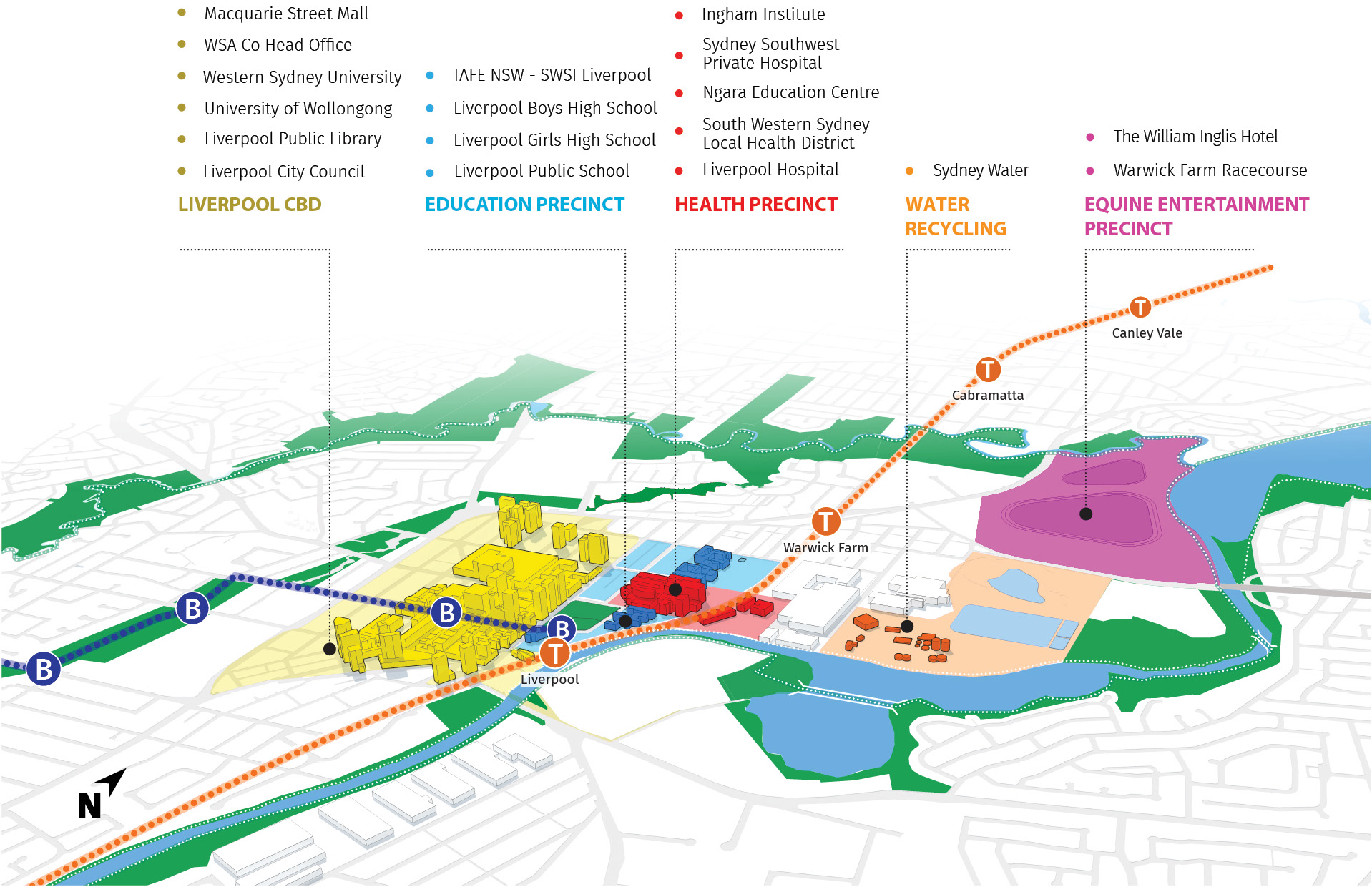 Detailed decisions on the alignment of roads, mass transit and urban development are important to long-term economic prosperity and liveability. The early adoption of planning principles to inform these decisions will be critical. Objective 26 provides initial principles for the development of South Creek. 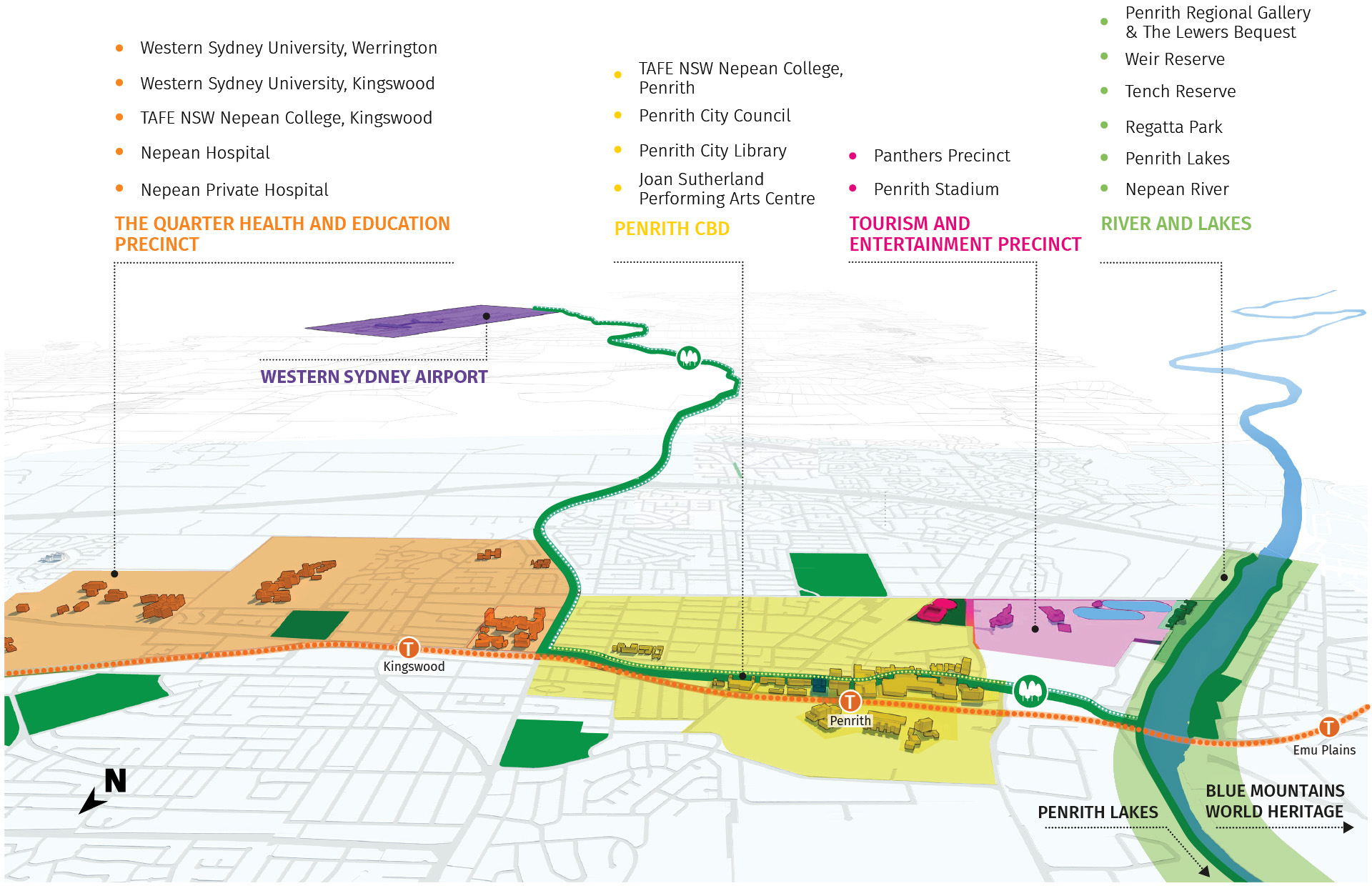 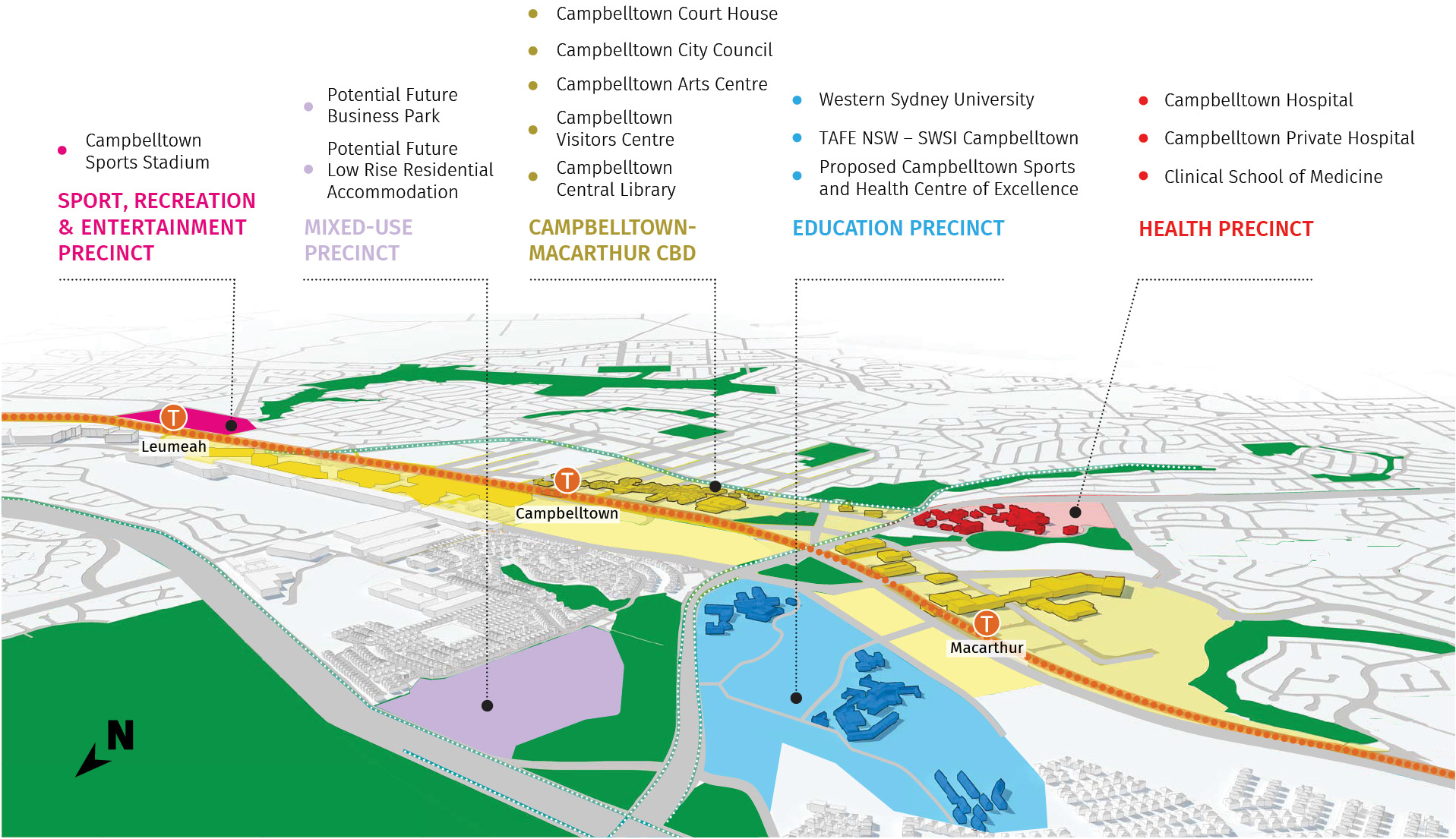 The NSW Government, the Australian Government and eight councils to continue collaborating to deliver the Western Sydney City Deal.
The City Deal will be accompanied by a draft Structure Plan that will indicate potential land uses for the Western Sydney Airport Growth Area.
An Implementation Plan will be prepared in 2018 and will build on the commitments outlined for the six areas of connectivity, jobs for the future, skills and education, liveability and environment, planning and housing and implementation and governance.