The vision for Greater Sydney as A Metropolis of Three Cities - the Western Parkland City, the Central River City and the Eastern Harbour City - seeks to deliver a more productive region. This will be achieved by driving opportunities for investment, business and jobs growth; supporting economic diversity; supporting internationally competitive industry sectors; and rebalancing the region's eastern economic focus so that all three cities benefit from growth.

The urban structure to support a metropolis of three cities needs to ensure people have access to a large number and range of jobs and services delivering a well-connected city - a 30-minute city.

Metropolitan and strategic centres provide 50 per cent of all Greater Sydney's jobs and therefore play a significant role in providing jobs close to home. When larger local centres are considered, this increases to 68 per cent. Facilitating the growth of new metropolitan, strategic and local centres will be an important outcome in growing jobs.

The Eastern City District forms the central portion of the Eastern Harbour City, in the eastern area of Greater Sydney. It contains more than a third of Sydney's jobs (over 900,000) and generates about half of its economic activity. Sydney CBD is the nation's financial and business capital and its connection to the world. It has a strong international and domestic tourist base and is known for its range of services, activities and attractions.

Beyond the Sydney CBD, Sydney Airport and Port Botany are international trade and transport gateways; Camperdown-Ultimo and Randwick are innovation, health and education precincts; and six strategic centres provide retail, commercial, health and community service activities. It is with the support of these places that the Harbour CBD continues to be competitive in a global market.

The Eastern City District has the highest proportion of knowledge and professional services workers in Greater Sydney9. Approximately 62 per cent of the population has achieved a tertiary qualification, one of the highest proportions in Greater Sydney. It also has the largest number of start-ups attracted to locations like Pyrmont, Ultimo, Surry Hills, Redfern, Port Botany and Sydney Airport. 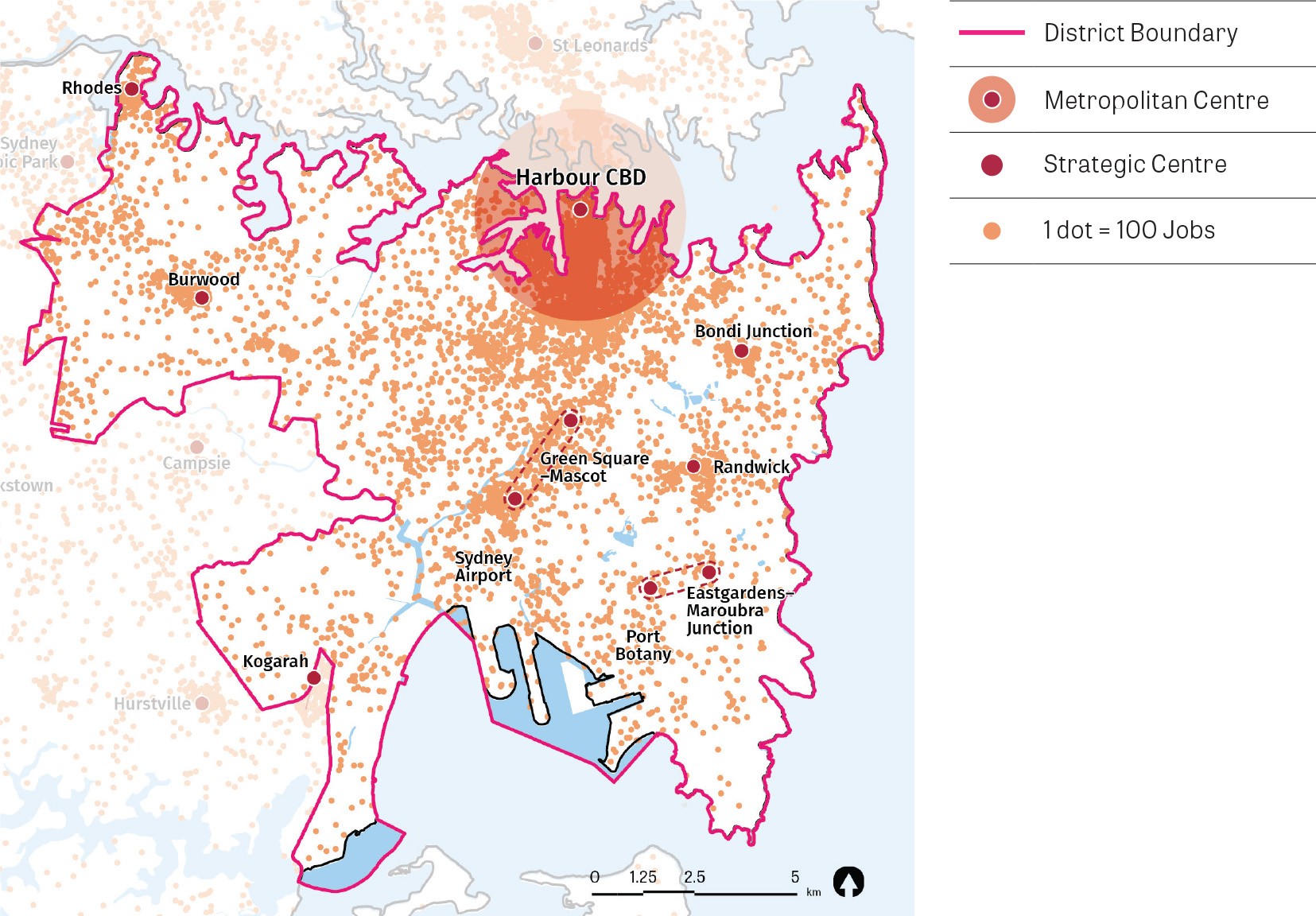 The District's economy is underpinned by a complex network of urban systems and services on industrial and urban services land and significant tracts of employment land in Port Botany, Banksmeadow, Enfield Intermodal Centre and Alexandria. Balancing the transition from manufacturing to professional, high-tech, scientific, creative industry, and ancillary distribution and warehousing while retaining locations for local urban services will further boost productivity.

More than 55 per cent of all jobs in the District are in the Harbour CBD. A further 20 per cent of jobs are within the trade gateways and strategic centres of Port Botany, Sydney Airport, Burwood, Bondi Junction, Eastgardens-Maroubra Junction, Green Square-Mascot, Randwick and Rhodes (refer to Figures 14 and 15)10. Job targets for strategic centres will guide councils and State agencies to the potential scale of growth and inform land use and infrastructure planning.

For the Eastern City District, improving productivity can be achieved by the following Planning Priorities:

E8.  Growing and investing in health and education precincts and the innovation corridor

E10.  Delivering integrated land use and transport planning and a 30-minute city