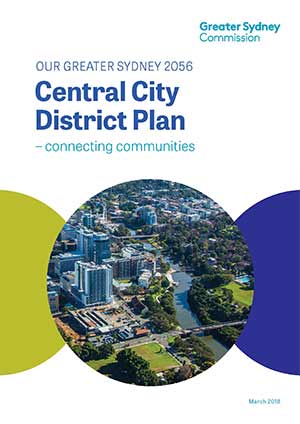 For the Central City District this includes radial transport links to and from Greater Parramatta, encompassing Parramatta CBD, Parramatta North and the Westmead health and education precinct, connected via Parramatta Park. Links to the north, south, east and west - and approved east-west connections - will increase the number of skilled workers who live within easy reach of Greater Parramatta.

This compact would identify possible scenarios for land use and infrastructure to assess optimal land use, infrastructure investment and community outcomes. The outcomes of the pilot will potentially inform government on how the growth infrastructure compact could provide an important benchmark for understanding the relative costs and benefits of new development.

In the Central City District many areas have already been identified for, or are experiencing, significant growth. These include Planned Precincts along the Sydney Metro Northwest corridor, new communities in the North West Growth Area and Planned Precincts and Urban Transformation Precincts such as Seven Hills, Wentworthville, Westmead, Granville and Auburn. These growth areas and precincts will need to be linked to a variety of employment opportunities, infrastructure and services.

In terms of transport planning, new public transport services and infrastructure such as rideshare, car sharing and other emerging modes that complement public transport will help connect residents to their nearest strategic or metropolitan city centre within 30 minutes.

Planning and investment in infrastructure is essential to attracting and retaining jobs in the Central City District and enhancing the liveability of existing and new communities with improved access to parks, sporting fields, schools and childcare facilities.